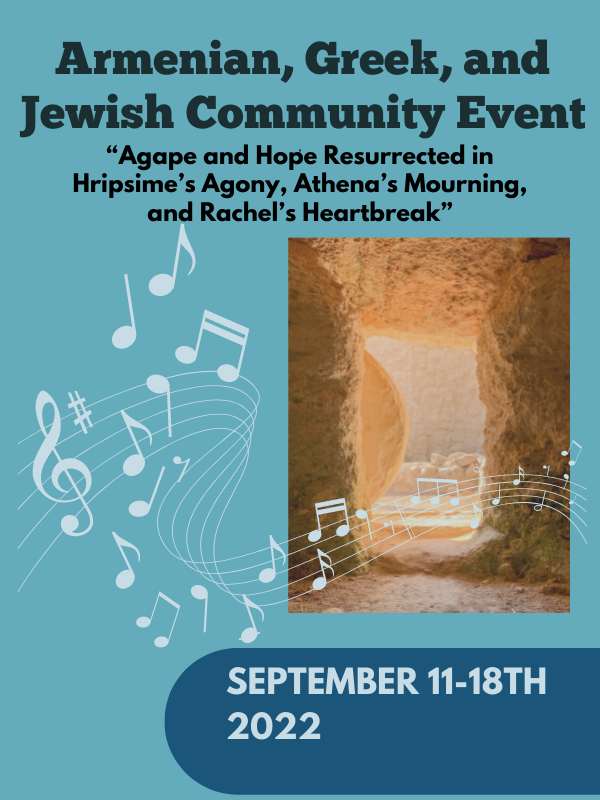 “Who, after all, speaks today of the annihilation of the Armenians?”, roared Hitler in his speech to his chief commanders in 1939 just one week before the Nazi invasion of Poland and the planned extermination of Jews.

2022 represents the 100th year from one of humanity’s darkest periods, a time point that inspired and ignited what eventually resulted in one of humankind’s bleakest moments. 1922 was the peak of the period between 1915-1923, when Christians and Jews were systematically targeted for their faith and culture. The western world’s general indifference to the genocide of Christians and Jews in Anatolia, the Pontus, and Asia Minor would soon be used by the Nazis as the basis of their plan to exterminate the Jewish people.

The Greek, Armenian, and Jewish Communities of Western Pennsylvania, on account of this sad moment in our histories, and on occasion of this marker in time, 100 years from 1922, are coming together in the month of September 2022 in a broad educational outreach to all of Western Pennsylvania, in art, music, literature, and history, to first commemorate those who perished brutally and inhumanely at the hands of perpetrators, but second, to use this milestone in our histories to show that in the face of despair and death, creation and inspiration for a more tolerant world was fostered and nurtured.

Additionally, the month of September will be dedicated to the music, literature, and artwork that was inspired by these sad moments in humankind’s history, in the post-World War II Armenian, Greek, and Jewish cultures.

Among the planned activities are: More details and registration to come!

A concert that will bring together Armenian, Jewish, and Greek musicians who will present music written by those who perished and/or survived those dark periods as well as music that was inspired by their lives and sacrifice. The concert is planned for the early evening of Sunday the 18th of September and, depending on the evolution of the COVID-19 pandemic, may be an in-person event, or virtual.